Britta Virves is one of the most sought-after young pianists in Swedish jazz. Virves presents her debut album Juniper, a deeply autobiographical work, joined by Jonas Bäckman on drums and Jon Henriksson on bass, with Kurt Rosenwinkel on guitar featured as a guest.

Britta Virves is an award-winning pianist and composer from Saaremaa, Estonia. She is based in Stockholm, Sweden where she has collaborated with many of Sweden’s finest jazz musicians. In addition to her own groups she performs with Grammy-nominated artists Joakim Milder and Norrbotten Big Band. Heartcore Records is excited to present her debut album Juniper, an intimate portrait of Virves’ development as an artist. The ten tracks contained within are emotionally clear and harmonically modern meditations on Virves’ search for spaces that inspire and feed her creativity. Junipers can be found all over Saaremaa, Estonia, the island where Virves was born. The hardy tree has become a symbol of resilience and protection for her that roots her to the memory of her home.

“Saaremaa”, a tender piano ballad is suffused with warmth and an insistent longing for home. Bäckman and Henriksson support Virves’ piano with an empathetic rhythmic counterpoint, like friends sharing in the stories of your childhood. This deeply emotional sense of storytelling and place informs many of the compositions on Juniper. “Rush Hour”, a piece exploding with the energy of Stockholm’s frenetic metro system, is propelled by Henriksson and Bäckman’s relentless swing. Songs like “Downton” and “Paris” are imbued with the care of a tourist’s explorative and wondrous eye as they fall in love with new surroundings.

The insistent rhythms of “Enigma” are a minimalist paean to the beauty of ice crystals Virves found on a cold windowpane on a wintry Swedish night. Other songs like “A Thousand Eyes” and “Starry Night”, take a widescreen perspective on place, looking up to the stars and back down at the Earth with a far-reaching cosmic eye. Virves’ tender melodies, Henriksson’s sonorous bass, and Bäckman’s elegant cymbal rolls evoke the grandeur of an evening sky full of blazing white stars. On “Ingenuity”, Virves takes inspiration from the name of the helicopter that NASA landed on Mars in 2021; it’s a breathtaking controlled flight into Virves and company’s nuanced and groove-filled world, and a gorgeous metaphorical ode to their own intrepid musical discoveries.

“When I hear Britta play, I hear a connected soul who’s able to communicate through the touch and sound of the piano. Her trio is in sync with this sensitivity and together, they create a highly dynamic and satisfying listening experience”, says the label founder Kurt Rosenwinkel. Through this album, we might come to experience a little fragment of what it is to be living together, on a rock floating through space. It’s an enormous perspective to behold from a human standpoint, but as Virves shows, it can be an infinitesimally small and miraculous one from a cosmic perspective.

“Sometimes you can’t stop listening. You are totally absorbed by the story, and above all, – how it is told. Someone who has the ability to truly capture and convince a listener can be described as a great rhetorician. An improvising musician who gradually sharpens his or her means of expression can be said to acquire a rhetorical ability.

Acquiring theoretical knowledge, a language and developing a relaxed relationship with one’s instrument are basic prerequisites. In addition, some improvisers have the ability to charge their music with expression, to touch us emotionally.

But the truly decisive skill is about capturing attention via a sense of trust. A few music creators have managed to achieve a balance between linguistic brilliance, emotional charge and genuine trust. Britta Virves belongs to this rare crowd and “Juniper” is a wonderful manifestation of her rhetorical ability. Carefully and patiently created stories that rarely follow the expected path. You simply cannot stop listening.” 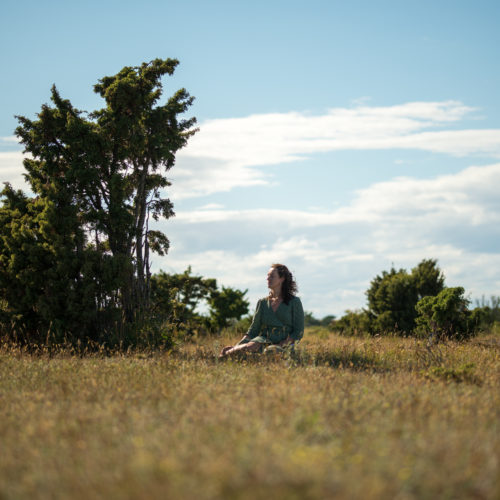